Disabled people commonly report feeling silenced and marginalized within mainstream U.S. culture, in the media, education, and medicine. Disability activism is premised upon the notion of speaking up for ourselves about how we live and how often we are excluded, silenced, and placed outside of the largely unstated but consistently reinforced norms for bodily appearance and function.

Nancy Mairs, a poet and essayist who lived for many years with multiple sclerosis, claimed in her amazing essay, “Carnal Acts,” that “speaking out loud [about her body] is an antidote to shame.” I believe this with my whole heart and embrace it, even down to my vanity license plate. 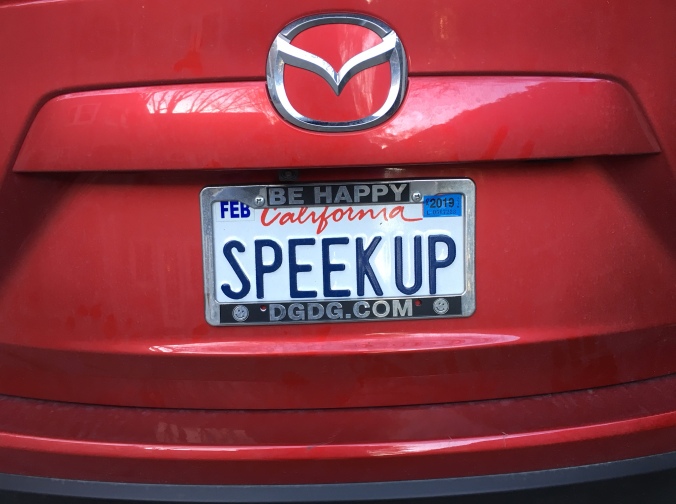 But I also get weary of speaking to account for my embodied being. Sometimes I would rather embrace silence when it comes to my disability. Maybe folks could just talk about the weather instead of engaging in a running commentary about my bodily differences? But just typing that  makes me feel anxious; it’s just not nice to refuse to answer other people’s questions.

On reflection, I came up with four types of interactions in which my body prompts others to behave in ways that seem to necessitate a meaningful response from me, even if I do not wish to perform “disabled activist” in that moment.

First, I respond to satisfy others’ curiosity. I’m in Starbucks waiting for a friend. It’s a lovely morning, and I’m wearing khaki walking shorts and a lavender cotton shirt. A dark-haired man walks in with two little boys, probably about four and six years old. The boys stand in line wriggling and bouncing impatiently. One of them catches sight of my shiny titanium prosthesis and grabs the other boy by the hand, dragging him toward me.

“Hi!” I say brightly when they arrive at my table. The boys smile back but say nothing, staring openly with avid curiosity at my prosthetic leg. “Pretty cool, isn’t it?” I say. “My leg has a computer in it and sensors and lots of metal parts.” I lift my prosthesis up and point to the computerized knee joint. “This is the computer. It has a battery. I have to plug in and charge up every night, just like your iPad.”

The boys’ continue to stare silently. “Want to touch it?” I offer, using my hand to extend the lower portion of the prosthesis toward them. The older one looks me in the eye hopefully. “Go ahead,” I urge. He reaches one finger out to stroke the smooth, cool surface, then smiles. He gently pokes the hydraulic mechanism and I giggle. Their adult finally shows up with two large go cups. I smile at the man, and he smiles back, nodding in acknowledgment before herding the kids outside.

I wasn’t upset at the boys, nor I could I remain silent in response to their genuine interest. But their curiosity signaled (albeit unintentionally) the novelty of my cyborg body, reinforcing just how far outside of normal the kids considered me.

Second, I respond to others’ concerns that I have failed to appear sufficiently feminine. Often these sorts of comments are in the guise of benevolent attempts to “help” me. For example, early on after I returned to work following the amputation, one of my students, overcome by the appearance of my prosthesis, tearfully offered to have her sorority host a fundraising event to purchase me a new prosthesis that looked “like a real leg” (clearly lack of funds was the only scenario she could imagine). Similarly, at a holiday party, an acquaintance asked me why my insurance wouldn’t pay for a “full leg prosthesis.” I assured her that my prosthesis reflected state of the art technology. She pointed to my narrow metal ankle and insisted, “But it looks like that, not like skin.” I end up explaining that the flesh-colored foam stuff looks like a mannequin limb to me (especially on an above-knee prosthesis), and I prefer the sporty, mechanical look to the plastic-y one.

My inability to participate in some social customs also seems to prompt frequent explanation. At a friend’s dinner party, I twice declined wine before responding to the third offer by stating, “I can’t have any alcohol.” This led to a zillion questions about the medications I take for managing phantom limb pain, which don’t combine well with alcohol.

Finally, I find it difficult to maintain my silence rather than explaining when I have briefly and unwittingly passed as more able-bodied than I am by wearing long pants and controlling my limp, before then outing myself. One day I was walking and talking to a university colleague, with whom I am only slightly acquainted, when we approached a set of stairs. Still talking, he didn’t pause before bounding up the stairs while I tried to interrupt him, gesturing toward the elevator.

Of course, I don’t have to respond in any of these situations; I could refuse to answer. I know my reluctance to remain silent when questioned is socialized and influenced by my identity as a white, middle-class woman, for whom responsiveness to others’ requests is often a deeply ingrained behavior. The thought of being deliberately rude when questioned troubles me most of the time.

I want to claim silence as another form of potentially powerful disabled speech, to embrace the freedom to choose not to speak out loud as an antidote to shame but instead (sometimes) to allow my cyborg body to speak eloquently for itself, without shame or obligation to explain.

2 thoughts on “Call and (You Must) Respond: Disability and Sought-After Silence”