Whenever students–usually men but sometimes women–tell me that having a U.S. Congress that is 80% men offers an adequate representation of the population and that our government actions and law making do not reflect a distinctly masculine bias, I respond this way: If Congress were 80% women, our nation would still have problems, but they would be really, really different problems than we have now.

I have yet to have a single student argue that this statement is untrue.

Added to that, Congress is also 80% white, privileging white individuals and communities in government; racial equity in representation would transform our law making processes and outcomes. While Congress still wouldn’t be perfect, it would almost certainly would be more just and equitable. 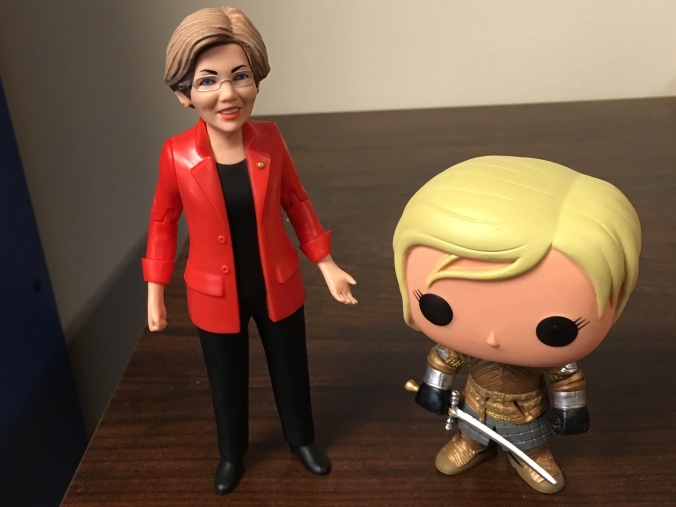 I don’t accept that men are innately violent or less empathetic toward the suffering of others than women are, and research conclusively confirms that much of what is assumed to be innate gendered behavior is actually attributable to language, culture, and socialization. For example, toxic forms of (learned) masculinity clearly contribute to the rash of heart-breaking mass shootings in the U.S., which are perpetuated almost exclusively by men.

I have been drawn to heroines my whole life, and I am looking to them now to bolster my spirit during tough times. I don’t discount male heroes; I just don’t seek them out.

The picture above is of two of my current favorite heroines, real life law professor turned Senator, Elizabeth Warren, and fictional female warrior from Game of Thrones, Brienne of Tarth. I keep both of these action figures in my office, and I have been turning to them for a lift when I feel discouraged.

Whether the challenge is coping with huge political turmoil or struggling to get my prosthetic socket on properly in the bleary-eyed early morning, I need symbols that resonate with me. Strong women lend me strength, women leaders help me to imagine ways to act as a leader, canny women model creative approaches to problem solving.

Elizabeth Warren is super smart and eloquent and above all she is persistent as she works to improve our nation. Brienne uses her tremendous physical strength and unswerving loyalty to serve first her king and later her lady and the lady’s daughters. Both of these women defy traditional norms of feminine deportment, crusading for what they believe in.

Symbols cannot substitute for meaningful action, but they can be a very powerful impetus to (and support for) individual and collective action. These two quirky action figures sit alongside photos of friends, family, and cats, making me smile and reminding me of my own strength and courage.

I bought a card the other day that says, “Please let me be the first to punch the next person who tells you that everything happens for a reason.” You can buy one from the talented Emily McDowell here.

In the best case scenario, “Everything happens for a reason” is an attempt to cheer a sick or suffering person with the notion that meaning can be derived from difficult experiences, important life lessons can be learned the hard way, that more will be revealed in time.

In the worst case scenario, this platitude shames people by implying that their suffering is justified or righteous—that is, in the big scheme of the Universe’s (or God’s) Plan, they got what they had coming (even if we don’t know the reason).

What “everything happens for a reason” is really about is fear—fear of the unknown and the unpredictable, fear that bad things like cancer happen for no reason whatsoever.

This is a reasonable fear, because it happens constantly. Bad things happen to good people, and coping with this fundamental injustice is an age-old moral struggle that has been talked and written about in all cultures for millennia.

I had a student in my health communication course several years ago who grew increasingly frustrated with me as she questioned me about my cancer experiences. It was the second or third class meeting of the course, so we didn’t yet know each other very well.

I had told students that my interest in studying health communication had come about because of my own serious health challenges from bone cancer and late effects. I was diagnosed in the middle of my sophomore year of college, so my story cut a little too close to home for some students’ comfort.

This student—let’s call her Chelsea—asked, “Did you smoke when you were young?”

“Does cancer run in your family?” she asked.

“Were you raised with a healthy diet?” Chelsea demanded.

“Reasonably so, sure. Not perfect, but lots of vegetables, and one fast food meal every week or so, but otherwise home cooking.”

I could see in her face before she said anything—skepticism, frustration, even anger. I smiled gently at her and waited.

“You’re acting like you just woke up one morning when you were a sophomore in college and you just had cancer,” she spit out.

I nodded my head. “Yes,” I said. “That’s exactly what happened.”

Chelsea sat back with her arms crossed over her chest.

I returned her gaze calmly. “I know that’s frustrating to hear. We all want to know what causes someone to get cancer. I wanted to know why me and why at that time in my life and what exactly caused me to get it. But usually there is no known cause.”

For years, I blamed myself for getting cancer. At the time I thought I was just being logical—after all, no precipitating event or other catalyst for the tumor was ever identified—but I now believe that I simply found it less scary to live in a world where cancer was my own fault than to live in a world in which chaos, random chance, and uncertainty prevailed.

If everything really did happen for a reason, then there would be logic and order and predictability in the world, and things would make sense. It is so tempting to believe that lie. It takes a lot of practice to surrender our staunch beliefs in causality, that every effect has a direct cause, and in fairness, that people get what they deserve.

Evidently I didn’t get enough practice in surrendering false certainty during cancer treatment.  But in the almost three decades since then, my many leg reconstructions, amputation, frustrations with using a prosthetic leg, and phantom limb pain have finally brought me to the point of accepting that most of the time I can’t know the answer to “why me” or “why him?”

While sometimes bad things happen because of someone’s negligence, greed, or thoughtlessness, we need to acccept that we live in a world in which random chance unfairly causes devastating illness, accidents, and even death.

While I wouldn’t care to actually punch the next person who tells me that everything happens for a reason, I will argue with her. I will speak the awful truth—that often there is no reason at all for terrible suffering. And we do no one any kindness when we pretend otherwise.

Unlike most of North America, I am not celebrating Valentine’s Day today. Instead, I celebrate Biopsy Day. Today is the anniversary of the biopsy that confirmed my diagnosis of osteosarcoma.

Twenty-nine years ago today, my talented and compassionate surgeon broke the news that my right femur (thigh bone) would need further surgeries to remove the tumor and rebuild my leg with a bone graft and metal supports, as well as months of high-dose, in-patient chemo.

Like many cancer survivors, I turn contemplative on the anniversary of my biopsy. I feel tremendous gratitude for my continued survival. I am grateful for the amazing family, friends, neighbors, and colleagues who have supported me through my long journey of cancer care and then of late effects. I am deeply grateful for the privilege of comprehensive and affordable health insurance, without which I would not have been diagnosed as quickly, nor had access to high quality treatment.

At the same time, today is a day in which I grieve the loss of the person I was before cancer. I grieve the lonely nights in the hospital, the unspeakable pain, the endless complications and side effects, the TIA that left my entire left side numb and paralyzed for hours, almost 20 years of surgeries that culminated in the eventual loss of my leg, the advent of phantom limb pain, and learning to live on pain medications.

For a long time, I tried to reject the grief, sadness, and resentment that I feel about my cancer and late effects because I thought it was wrong not to be grateful for my survival. Osteosarcoma strikes many children and teens, killing them before they even have a chance to grow up. To feel pain and loss seemed horribly inappropriate for a long-term survivor when others die of cancer every day.

Yet over time, I came to understand my gratitude and grief as interwoven and inextricable from one another. My cancer diagnosis was a defining moment that forever altered my life course, in good ways as well as difficult ones. I would never have become a professor who studies communication in health care delivery if I had not had such intense treatment experiences. I would not be developing innovative methods for researching and sharing patients’ (and health care providers’) experiences if I had not been forced to conduct research in my unruly survivor body.

So today I embrace both my gratitude and my grief. I feel happiest when I am honest about the whole range of my emotions each year on my biopsy anniversary. Acknowledging my pain and losses frees me to release them in a way that denying them never could.

I wish you all a Happy Biopsy Day!