Pigeons mate during spring; in Massachusetts, the season of pigeon lust begins in early May, a fact I had been unaware of until I had cancer surgery. 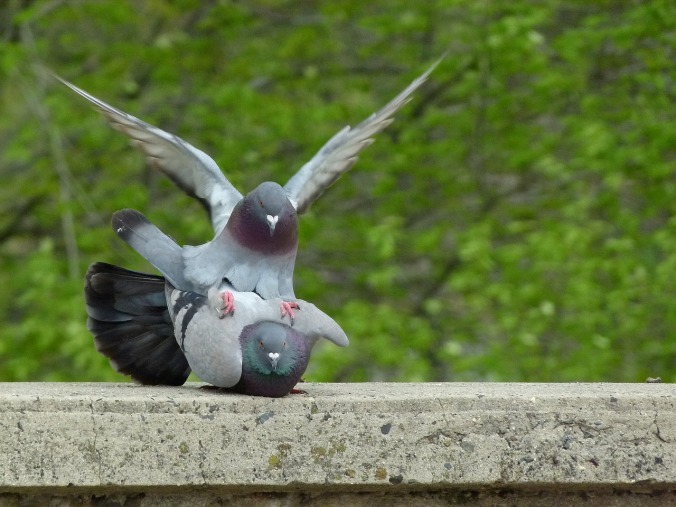 Here is a funny moment from when I had the first of the “limb salvaging” surgeries on my right leg to remove the tumor and insert a bone graft and metal hardware. It was 1989 and I was 20 years old.

My experience with that surgery was complicated by the randomness that resulted in me having a hospital roommate named Louise. She was a white lady in her late 60s and what my nana would have called, “quite a character.” Louise routinely joined my conversations with visitors uninvited, interrupted me when I was reading, watched TV all night so I couldn’t sleep, and offered her opinions on anything and everything to anyone who would listen. I did my best to be friendly at first and then resorted to being as civil as possible as I grew more and more exasperated.

But one afternoon, Louise made me laugh so hard that I will never forget it. I was reading the hardcover copy of Mitla Pass that my father had brought me when Louise started another of her diatribes.

“Oh my LORD, those pigeons, look at this, would you look at THIS!” She jabbed her finger toward the window, and I shot her an annoyed look.

Louise shook her head, outraged. “Look at this, I can’t believe it, I can’t BELIEVE it! Can you believe this? I’m trying to eat!” She waved her hand at her lunch tray and looked at me indignantly, expecting me to join in her disgust.

I had no idea what she was talking about, and I didn’t care. I tried again to ignore her, but she ranted until finally I gave up.

“What are you talking about?” I asked with a sigh.

Through my laughter, I squeaked out, “The balcony outside our window probably is their home,” but she ignored me. It occurred to me that I ought to take notes in my journal, and I tried, but my laughter made it difficult.

Undeterred, Louise continued. “Go home! I wish I had a stick! If I was on a street corner and I saw two dogs doing it I would just walk away, but I can’t get away from this! I shouldn’t have to watch this!” Louise turned to watch me as I held my belly, gasping for breath as I continued to laugh. “Go ahead and laugh you! Go jump in the lake! I wish these birds would go jump in a lake too! Look at that, he’s right on her! Don’t they get tired? How long can they do it anyway? He’s walking away—good. Oh no, he’s BACK! Would you look at them go?! I shouldn’t have to watch this kind of stuff! Stop laughing! This is awful! Oh look, there’s another one! Are they going to have a three-way thing!? Ah, they are flying away. Good. Go home!”

A few minutes later, a doctor came in to examine Louise’s leg, and I was still laughing. The doctor kept missing Louise’s comments because she was so busy staring at me, presumably trying to figure out what was so funny.

Furious that she did not have her doctor’s undivided attention, Louise demanded, “Just ignore her, doctor! She’s just, well, just ignore her!”

I subsided into giggles, feeling grateful to Louise for the first (and only) time.

One thought on “Having cancer surgery during pigeon mating season: A true story”