Trying not to fidget in my chair, I looked around the table at the other attendees of the committee meeting. My fellow faculty looked at their notes, at the proposed wording of a recommendation to our provost projected on the screen at the far end of the conference room, or at the woman currently speaking. They all appeared to be fine.

I was not fine. My phantom pain had kicked into gear and it felt like a hot needle was stabbing me in my (absent) right big toe, while the top of my (absent) foot felt like it had been badly burned. I concentrated on not gasping or wincing every time the pain spiked, which it did every 15 seconds or so, then relaxed my shoulders gratefully as it receded. 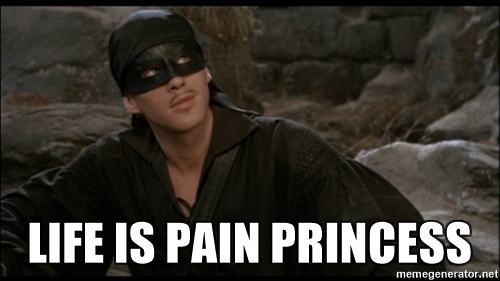 Side note: I always feel strange describing phantom pain to other people, whether out loud or in writing. I’ve never had someone actually heat up a needle and plunge it into my big toe, nor have I ever had the top of my foot badly burned, nor any of the other bizarre comparisons I reach for—like a really bad sunburn that someone slapped, like an electrical current shooting up my leg, like a knife stabbing the muscle in my calf, etc. So I’m describing things that have never happened in order to explain current pain in a limb that quite obviously no longer exists, and that’s so weird it makes me feel crazy.

Anyway, the phantom pain made it difficult for me to concentrate on or contribute to the meeting, which made me feel self-conscious, frustrated, tired, and more than a little stressed out. I could have left (and no one would have criticized me for doing so), but leaving wouldn’t have made the pain subside, and if I left every activity in which I engaged while in pain, I wouldn’t do much. So I tried to hang in there.

At the same time that phantom pain makes me feel stressed out, I also have detected over the years a definite correlation between being stressed out (by whatever) and an increase in phantom pain. So impending publication deadlines, big stacks of grading, monstrous to-do lists, an argument with my spouse or a friend, and updates on tragedies—from the recent Las Vegas massacre to the ongoing Syrian refugee crisis to the U.S. school-to-prison pipeline—all cause me to be in more pain.

Anyone who lives with chronic pain knows, and probably some others will correctly deduce, that being stressed by pain and pained by stress fosters a terrible spiral of pain that is difficult to stop and incredibly depressing. I feel grateful that medications control my pain as well as they do, so that most of the time my pain is manageable.

In the end, the best I can do is to try to manage stress through moderate exercise, escaping into a book, cat cuddles, and of course some less healthy strategies as well (think binge-watching on Netflix and simple carbs). Or I could always watch The Princess Bride yet again—“To the pain!”